Showtime in the Canyon of Heroes: Awash in a Deep Blue Sea of Revelry 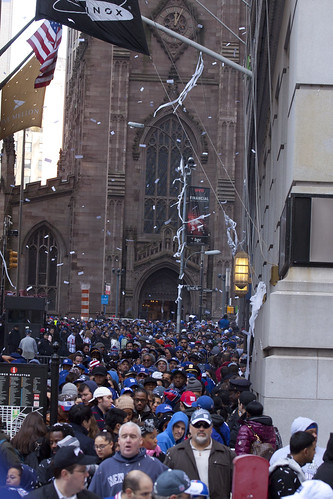 My day begins as I chat with a young couple wearing Giants jerseys and black Band-Aids under their eyes while we wait for a train that will take us to a parade, and ends with a National Park Service worker who is blowing confetti out of the streets while smoking a fat cigar asking me with a polite smile to please move out of the way.

More than a million people were expected to attend the ticker-tape parade along Broadway on Tuesday celebrating the Super Bowl champions. By 8:30 AM, it’s easy to see how this number might be achieved. Crowds are already thronging to the parade route and many look like they never went to bed.

I can hear the rumble from three blocks west of Broadway even though the skyscrapers absorb noise like the world’s largest carpet, or perhaps they just pull it up toward office workers 30 floors high in the sky.

It is the kind of warm February day where the clouds roll back and expose a robin’s-egg blue dome and New Yorkers look around, take their coats off and ask themselves how hot the summer will be. It’s not that we always complain; we just want to prepare.

The people who have staked out the area around Broadway at Wall Street are a raucous group; mothers and their children are nesting on other corners. This spot belongs to toilet-paper throwers, the 9 AM beer drinkers and the fans who are so pumped they scream at their neighbors and the crowds across the Canyon just to have something to do. “We want salsa!” they shout and I duck as a football comes whizzing across the canyon and misses my head by inches.

While these revelers awash in royal blue are waiting for the parade to begin, others are heading to jobs or walking poodles with neon-yellow booties and pink coats as if a million other people just happened to be in their Lower Manhattan neighborhood. Hawkers everywhere are exhibiting entrepreneurial spirit, though there are few takers for $30 Giants caps.

Alex Fernandez, manager at L’Atelier Des Fleurs Floral & Event Design, is betting someone will come in and buy a single flower or three to toss at the Giants’ feet. He’s gotten more phone calls by now than he usually does all morning.

Outside the parade route, fans thirsty from all their screaming were streaming into local bars.

Some people in Lower Manhattan didn’t quite know what to do: Go to work or celebrate? Many, like Mike from New Jersey, decide to do both. Mike was at The Porterhouse Brewing Company around lunchtime and said he was going back to work just to check a few e-mails and shut off his computer before returning to the bar.

Porterhouse co-owner Eddie Travers said the bar was as packed on Tuesday as it was on Sunday when the Giants bested the Patriots. “Go Giants, because this is like a Paddy’s day in February,” he said.

John Moran, owner of the Killarney Rose and a lifelong Giants fan, said the bar would be celebrating the Giants’ win the whole week. He was visiting his father, who had owned the bar since 1968, in Florida when the team won and he was not surprised they pulled off a victory.

“When you’re watching the team, everything is ‘we,’ not ‘I,’” he said. “That’s the same way you run a business; we’re a team.” Though he loves his Giants, the thing he’ll remember about the Super Bowl is being with his family, which has the kind of bond that just can’t be broken.

Outside, the day wears on and the procession moves through the Canyon of Heroes, host to so many other ticker-tape parades before honoring returning vets from World War I, Olympic teams, Charles Lindbergh. I head toward Broadway on Wall and the sound of revelers and wonder if anyone ever bought that flower to throw in the street.

It’s 50 degrees outside and yet it’s snowing. We have confetti in our hair.

Kelly Rush is Field Liaison for the Downtown Alliance.

Our Picks of Parade Pix