The Birth of J&R, Jr. Right Here in Lower Manhattan 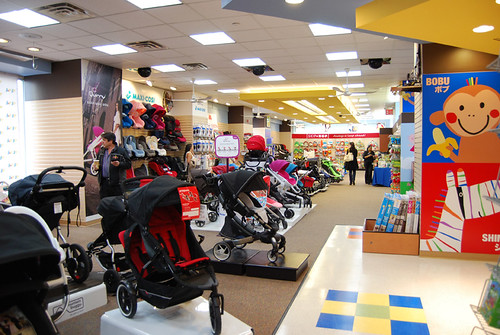 The birth of J&R Jr., the new store for kids in Lower Manhattan, really began with the birth of Jason Friedman’s own kids. Jason, Vice President of J&R, and his wife, a pediatrician, had a “Jason, I think we can do better” conversation that created this fascinating store. It was after their second child was born fifteen months ago that they began in earnest to make this new store happen.

Going to J&R is always an experience because they sell so many different things in all of their different stores along Park Row, but from the moment we walked into the store at 1 Park Row, I knew something was different.

Since J&R Jr. is on the second floor, they placed colored footprints on the floor to mark the path to the escalator to go upstairs. When I got to the top, I almost forgot I was in J&R.

The fact is Jr. has such a different feel to it. Jason, the founder of the store, said they wanted to “design the dream kids store” and it is clear he and his team thought long and hard about the feeling they wanted to create.

In fact, he said he and his wife would have conversations about all of the requirements for the store including child-friendly bathrooms, a lactation area with a little private space, dedicated stroller entrance and parking area, and even a children’s play area/event space.

My own kids are now more than nine years old and seem a little too old for this new store, but I have to say I wish this store had been around when they were young, I probably would’ve been walking over there a couple of times a week on my lunch break. Instead, I’ll be popping on over to see what I can get my one-year old niece.

For more photos, please check out our Flickr set or view videos from the press conference.

Where to Find That Perfect Valentine’s Day Gift? Look No Further than Lower Manhattan!

A Love Story: ‘We Built a New Life with Each Other in Lower Manhattan’